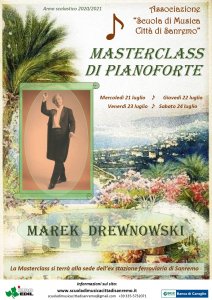 Marek Drewnowski is a distinguished pianist, who rose to international fame when Leonard Bernstein invited him to perform with the Boston Symphony Orchestra in 1985 after listening to his recording of 12 Piano Sonatas by Domenico Scarlatti only once on his car radio. Mr. Drewnowski went on to perform at some of the most renowned and prestigious concert halls in Europe, the United States, and Japan. He played under the baton of Leonard Bernstein again in 1989, during a special concert marking the 50th anniversary of the outbreak of World War II. The event gathered other world-famous artists such as Barbara Hendricks, Herman Prey, and Liv Ullmann, and was broadcast by TV stations throughout the world. Born in Kołobrzeg, Poland, Drewnowski began to play the piano as a child. He studied piano at the Warsaw Academy of Music with Ryszard Bakst and Zbigniew Drzewiecki and, after Professor Drzewiecki’s death, at the Academy of Music in Krakow under Jan Hoffman. He graduated with a Master’s Degree in Art and later received a Ph.D. degree from the Academy of Music in Łódź. In 2016, he was promoted to the rank of Professor, the highest academic rank bestowed in Poland by the country’s president upon the recommendations of the university and its academic community. Mr. Drewnowski’s recordings include Domenico Scarlatti’s 12 Piano Sonatas (DUX, 1975); Piano Concertos No. 1 & 2 by C.M. von Weber (Arts Music); music by Frederick Chopin, including his piano concertos in chamber version, which was revived by Drewnowski himself and for which he received high critical acclaim; Tansman’s Piano Concerto No. 2 and Szymanowski’s 4th Symphony Concertante. Since 2007, the pianist has been involved in the Swiss-Polish project (the collaboration between Harmusica and the Josef Hofmann Foundation), to record complete works of Frederick Chopin. So far, he has recorded eight CD’s with concertos, waltzes, preludes, variations, mazurkas, sonatas, etudes, and ballads. Marek Drewnowski is the president and founder of the Joseph Hofmann Foundation. Its mission is to promote the recognition and appreciation of the recording, literary, educational, and inventive legacy of the Polish pianist, Joseph Hofmann, as well as the fostering of artistic advancement among young musicians. Its educational programs include music courses and competitions for young pianists, as well as concerts and scholarships. As a part of the Foundation’s outreach, Mrs. Drewnowski has recorded two CD’s: Piano Concertos No. 2 and 4 by Ludwig van Beethoven and Piano Concertos in Chamber Version by Fryderyk Chopin. Mr. Drewnowski is also known for his remarkable skills as a conductor. He is the founder and manager of the renowned Chopin Soloists Quintet and Chopin Soloists Orchestra, and the director of the J. Hofmann and I.J. Paderewski Festivals. He has been involved in numerous movie projects – he appeared as Frederick Chopin in the movie Chopin’s Concert (“Koncert Chopina”) by Krzysztof Zanussi, co-produced Frederick’s Fascination (“Oczarowanie Fryderyka”) by Izabela Cywińska, and has written a screenplay of a feature film about Ignacy Jan Paderewski (under development). Mr. Drewnowski has enjoyed a long and successful career in teaching. He has been a long-time piano professor at the Academy of Music in Łódź, Poland and other Polish music institutions, and has taught at the Schola Cantorum in Paris, France. He has conducted master classes around the world, including South Africa University of Pretoria; the Geneva Conservatory of Music in Geneva, Switzerland; Lviv Conservatory in Lviv, Ukraine; Conservatories of Music in Seoul and Busan, South Korea; the Academy of Music and Performing Arts in Tilburg, The Netherlands; Chopin Classical Music Festival in Valldemossa, Majorca, Spain; and conservatories of music in Rome, Pieve di Teco, Piediluco, and Sanremo, Italy. He is currently a professor in Hacettepe University Ankara State Conservatory in Ankara, Turkey. Mr. Drewnowski is a devoted and beloved teacher, who enjoys working with ambitious young artists. He has a remarkable ability to communicate his ideas to his students and to challenge them on many levels – musical, intellectual, and emotional. His goal is to pass on his extensive international experience to his students so that they can achieve success, too. Many of his students have done extremely well at international piano competitions, and have numerous recordings and worldwide performances on their resumes. In 1991, Mr. Drewnowski received the prestigious Orpheus Award from the Music Critics Association for his performance of the world premiere of Stefan Kisielewski’s Piano Concerto at the celebrated Warsaw Autumn festival of contemporary music. In 2010, Drewnowski received Chopin’s Passport Award from Poland’s Ministry of Culture and National Heritage, given to distinguished artists who have contributed to the promotion of Chopin’s legacy. In 2017, he was awarded the Medal for Merit to Culture–Gloria Artist by the Ministry of Culture and National Heritage. In 2020, he was awarded the Golden Owl of the Polish Diaspora awarded by the editors of the Polish community Jupiter and the Polish Intelligentsia Club in Austria. Also in 2020, he received the Grand Prix du Disque Frederic Chopin for the album Songs by Fryderyk Chopin recorded with the singer Henryka Januszewska, awarded by the Society of Fryderyk Chopin, TIFC, during the 9th International Record Competition.